Fair Squared Apricot Shampoo is a gentle and light shampoo, while Vanilla Shower gel is, with its creamy texture, especially suitable for dry skin. 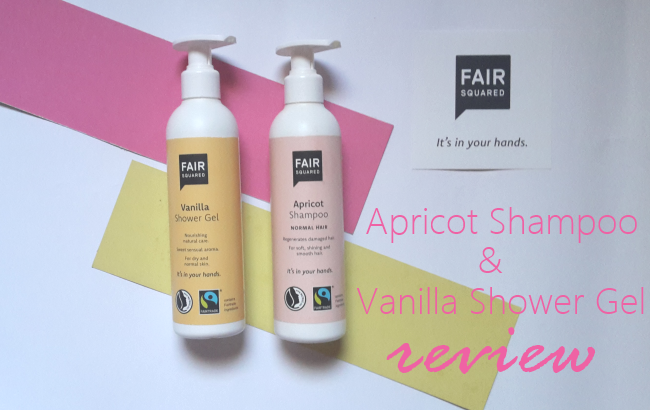 Fair Squared Apricot Shampoo and Fair Squared Vanilla Shower Gel are both from the new collection and both are Natrue certified.

Shampoo and shower gel come in a white plastic bottle with a pump for an easy application.

Fair Squared Apricot Shampoo is of semi-liquid texture. Its scent is somewhat fruity and its source, to my nose, does not appear to be natural: as in from essential oils – after all, there are no essential oils listed. I’ve tried the shampoo only once without the conditioner in order to test how long the scent lasts and whether or not it would leave the hair tangled, so based on that I can say the scent lasts for about an hour or so. There’s a medium lathering with the shampoo; if I were to guess, I use about 5ml of the shampoo in order to achieve that feeling that shampoo is working. It feels quite light on the hair, yet it does clean the hair fairly well. The hair does not feel heavy under the shampoo, but I wouldn’t recommend it for very oily hair. While the Fair Squared Apricot Shampoo is not particularly rough on the hair, conditioner is needed afterward; as of yet, Fair Squared does not offer one.

Fair Squared Vanilla Shower Gel is of a creamy texture. It doesn’t lather all that much, but the skin does feel clean after using it. There’s also quite a soft feeling the shower gel leaves on the skin so I think it would be suitable for those with dry skin. I’m still not quite sure about the scent – whether it’s more nutty or vanilla, but neither give me a natural source of the scent.

How about the ingredients? There aren’t many natural ingredients in either of the products, and both products contain sulfates.

Olive oil is an antioxidant with high content of essential fatty acids. It has anti-inflammatory, anti-aging, soothing and healing properties; great moisturizer. Apricot Seed Oil is a great emollient with soothing properties. Contains Vitamin A. It can be used as a hair conditioner and for dry and itchy scalp. Wheat protein, a skin conditioning agent, has moisturizing and strengthening properties, but at the same time can cause skin allergy.

Ascorbyl Palmitate is a fatty acid and antioxidant. Tocopherol is a potent antioxidant. Glyceryl stearate is an emulsifier. Citric acid  is a pH adjuster, buffering and masking agent. Coco glucoside is a synthetic foaming and cleansing agent. Polyglyceryl-6-Palmitate is an emulsifier. Sodium Cocoyl Glutamate is a surfactant and a detergent; likewise, so is Disodium Cocoyl Glutamate (take a look what I think of “coconut derived” ingredients).

Both the Fair Squared Apricot Shampoo and Fair Squared Shower Gel are decent products, though they contain very little natural ingredients. The shower gel is gentle and creamy, and cleans nicely; it would be suitable for all skin types and especially for dry skin. The shampoo also cleans the hair nicely and doesn’t leave the hair tangled, but both products contain a bit too many potentially problematic ingredients.

Price? Shampoo falls into the price category of similar middle-priced shampoos, although given few natural ingredients, the price of both the shampoo and shower gel being €9,95 for 250ml seem a bit too high; especially if I were to compare the Fair Squared Shampoo with recently reviewed Urtekram Rose Shampoo. Both shampoos contain some of the same problematic ingredients, but the Urtekram shampoo contains more natural ingredients and costs less.

Would I buy Fair Squared Apricot Shampoo and Fair Squared Vanilla Shower Gel again? Maybe the shower gel, but not the shampoo; even though it did perform OK, it does not contain enough natural ingredients to justify such price. Though, it should be noted: while shampoos, containing many more natural ingredients, and some even containing, for example, Sodium Coco Sulfate, fall under a much pricier category.

What do you think of natural shampoos? Do you avoid all sulfates, including, for example, Sodium Coco Sulfate? What’s the highest price you’re willing to pay for a natural shampoo? Have you tried Fair Squared Apricot Shampoo and Vanilla Shower Gel?

Fair Squared Apricot Shampoo and Fair Squared Vanilla Shower Gel have been provided to Nature of Europe by Fair Squared for the purpose of an honest review.