So far, I’ve reviewed one BB Cream and one DD Cream, so now it’s time for a CC Cream review –  the Alorée CC Cream.

Just like Alorée Skin Elixir, the Alorée CC Cream is also based on Alorée’s prime ingredient Barley Leaf Extract. The Alorée CC Cream comes in two sizes: a 13ml travel/sample size and regular 40ml size. I was sent a 13ml tube for a review.

The scent of Alorée CC Cream is also interesting and very similar to that of Alorée Skin Elixir: a little bit of a cut spring grass scent and more of a sweet smelling scent, whose source, most probably, is grape seed oil.

If BB creams are of a more thicker consistency and have less coverage, CC Creams are suppose to be of a more liquid consistency and have better coverage – color correction abilities. The Alorée CC Cream is,  indeed, of a more liquid consistency. Application turned out to be quite a task, since the CC Cream dries quickly, which in itself may not have been that big of a problem had Alorée CC Cream not been flaky and cakey upon application, unfortunately, even with one layer. The coverage unfortunately is not as promised either, so with one layer looking flaky, another one would only make things worse. While the liquid consistency does not call for being used after moisturizer and/serum, I tried both – to no avail – the flakiness remains. Knowing in advance the result, I tried using it as a primer under my foundation and that did not work well either. 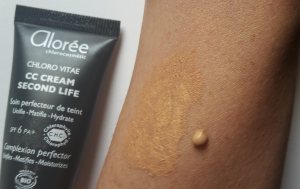 As far as the color goes, I am used to being moody when it comes to finding a foundation or tinted moisturizer that would be right on target, as well as being used to natural foundations and tinted moisturizers, having their colors based on minerals, going a bit darker after a while upon application, Alorée CC Cream changed its color way too dark for my liking – it actually turned quite orange-y as well as turning too glowy. As far as promised coverage? Well, there’s some, but most certainly not as much as promised or as you’d expect from a CC Cream. This CC cream does have a light feeling on the skin and has moisturizing abilities, but, this is not suppose to be just a moisturizer, but a coverage correction product.

It should be also noted that SPF of this CC Cream is only 6.

The ingredients? Somewhat all over the place. While there are natural and skin-beneficial ingredients in this Alorée CC Cream, there is also quite a lot of synthetic ingredients, some quite problematic, but all in all – too many of them for this product to be called all natural. When you have over 20 ingredients and only 4 natural, along with minerals (titanium oxide and iron oxide) such a product could hardly be called natural.

Grape Seed Oil, a great moisturizer, is rich with fatty acids, as well as highly potent antioxidants (such as Vitamin E, Vitamin A, Vitamin B and Vitamin C). It has astringent and anti-inflammatory properties. It tones the skin, helps fighting aging of the skin and promotes skin’s elasticity. Olive oil is, especially due to squalene, a potent antioxidant, with anti-inflammatory and anti-aging properties; it smooths and softens the skin. Chlorophyllin Hordeum Complex, a Barley Leaf Extract is a potent antioxidant, a oxygenating phyto complex protecting the skin from premature signs of aging.

Dicaprylylis an emollient which provides for easy spreadability and for leaving a velvety feel on skin without seeming greasy or slick. It also helps other ingredients penetrate skin better. Glyceryl Stearate Citrate is a lubricant; it gives the skin a soft and smooth appearance, but there’s a strong possibility it’s comedogenic. Polyglyceryl-3 Stearate is an emulsifier and an emollient. Triheptanoin is a viscosity increasing agent as well as penetration enhancer.

Sodium Anisate is an antimicrobial preservative, derived from fennel. There’s not enough data at the moment regarding the effects it has on the skin. 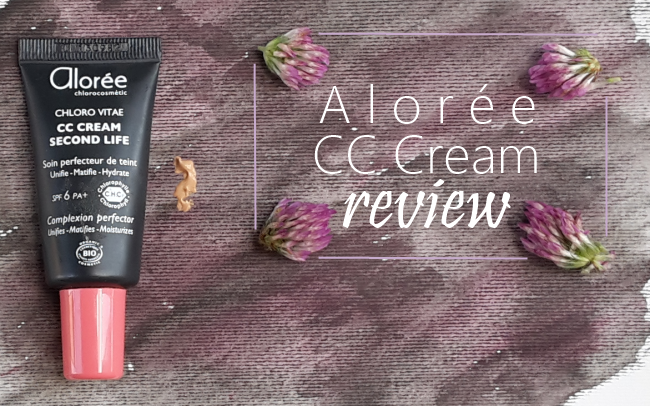 My final word? After testing Alorée Skin Elixir I had high hopes for Alorée CC Cream. Unfortunately, it just didn’t work for me: from difficulty with its application and flakiness, to turning too dark after application, as well as with coverage not being as promising. And even when there was no immediate flakiness, after a while, the CC Cream started looking like it fell apart, kind of like if you quickly mixed mineral powder with moisturizer, when minerals and cream just do not agree to stick together anymore. Given the many ingredients, which are suppose to make this cream appear silky and smooth on the skin, and it doesn’t – I am not certain what went wrong here. Maybe someone else might find this CC cream their perfect CC cream, unfortunately, I did not have such experience myself.

Price? Around 18€ for 13ml, which I think is excessive, and 41€ for 40ml, which, in my opinion, is also too much – performance aside – but also given the ingredients it contains.

Have you tried Alorée CC Cream? Have you liked it any better than I did? Which is your favorite natural CC Cream?

Alorée CC Cream has been provided to Nature of Europe by Lucy Rose for the purpose of an honest review.

🌱 MY CURRENT MORNING SKINCARE ROUTINE 🌱 It'